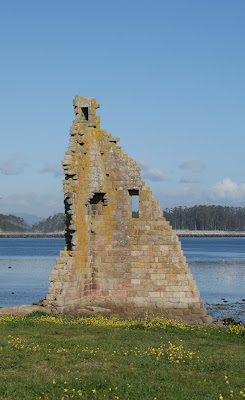 In the Middle Ages the feudal system was set up, in which the nobility held lands from the Crown in exchange for military service , and vassals were in turn tenants of the noble people, while the peasants were forced to live on their lord's land and render him labour, and a share of the produce in exchange for military protection. This system continued later in Modern Ages; the noble families that dominated Cambados in those times were: the Earl of Fefiñans, the Earl of Monterrey (in Cambados village) and the Chariño-Soutomaior family and Earl of Castronuevo (in Santo Tomé village). As we can see, in those days we had not only a place called Cambados but three: Fefiñáns, Cambados and Santo Tomé, ruled by three different noble families and with clear bounderies; and this separation remained until the 19th century and the end of Feudal System because of the Liberal Revolution and the creation of modern town councils. Then the three 'vilas' were joined into one: Cambados , with one town council and one town hall.
In Modern Age (from 16th to 18th century) Cambados and Galicia also lived a magnificent period in which art and culture boosted. One of the reasons of that growth was the introduction of new crops which came from America: corn and potatoes. Thanks to Galician climate, which is mild and wet,  crops grew a lot and provided the peasants  with important profits that went indirectly to Nobility and Church through the taxes called 'foros'. With this money, They both built great houses (called 'Pazos') and many churches and abbeys and Cambados was not an exception. Throughout  this period the most important buildings of the town were constructed:

-         ' St Mariña’s Church', built  at  the end of 15th and  the beginning of the 16th century probably by Lady María de Ulloa ( Earl of Monterrey’s sister and Alonso Fonseca III’s  mother, archbishop of Santiago)  in Gothic and Renaissance style. In 19th century  it lost its use as a church. It was abandoned, ruined and finally became a cemetery. In our opinion, it is the most beautiful cemetery in Galicia 'with its arches supporting the sky' as the excellent Galician writer Álvaro Cunqueiro said. 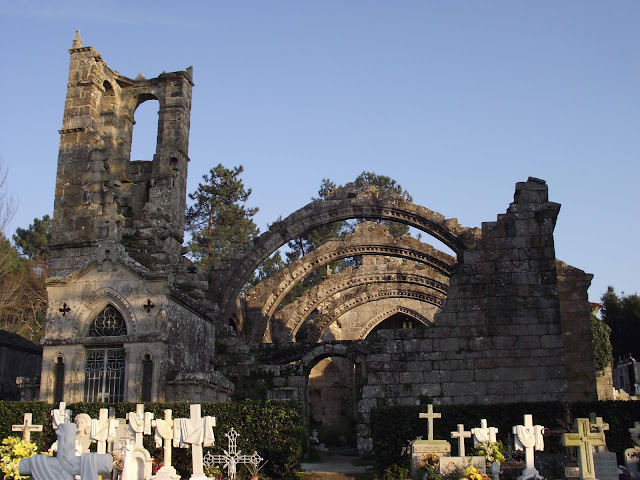 -           'St. Francisco Abbey' built as St. Mariña Church at the end of 15th and the beginning of the  16th century in Gothic and Renaissance style. Juan Delval and his wife donated  the money for the Church and because of that they are represented in the façade and buried inside the Church. In the 19th century during the liberal revolution the property of this building passed down to the State. The Abbey was demolished, some parts of the land were sold to rich families of the town like The Fragas  and the Church became the parish Church instead of St. Mariña church. 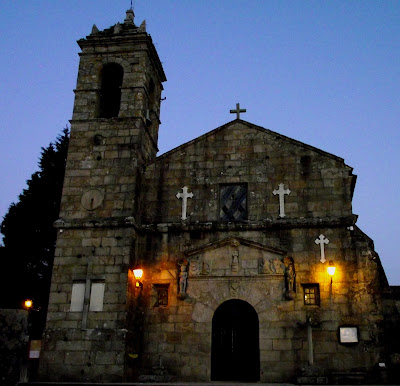 -          'O Pazo de Fefiñáns' was built in the early 17th century by The Sarmiento-Valladares family. They were Gonzalo Valladares and Fernando Valladares, both 1st and 2nd Earls of Fefiñáns. This Pazo or Palace was  built in a land which belonged to the archbishop of Santiago. Later it passed down to the Spanish King Philip II and finally sold to Valladares family. This Pazo has Baroque  elements and a great Italian influence.

-   'St. Bieito Church' was also built in this period  by the Earls of Fefiñáns and the Marquess of Figueroa (a marquess is above a count and below a duke). It was the private chapel of Fefiñáns family, where many of its members are buried. Today it  is a church that depends on the parish of St Mariña 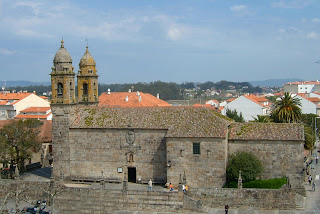 -          'O Pazo de Ulloa' was built by the first Count of Monterrey, Sancho de Ulloa in 1517. Later it became  María de Ulloa (his sister) and her sons’ residence, one of which  became Archbishop of Santiago and Toledo, Alonso III Fonseca . He was also founder of the University of Santiago de Compostela. The Manor House was rebuilt later by successive owners who had since passed by inheritance to the House of Alba and the Marquis of  Riestra, a businessman, owner of the first resort of Isla de la Toja, or to the rector of the University of Santiago, José María Suárez Núñez. The shield on the front  shows the emblems of Acevedo, Ulloa, Fonseca (5 stars) and Castro. 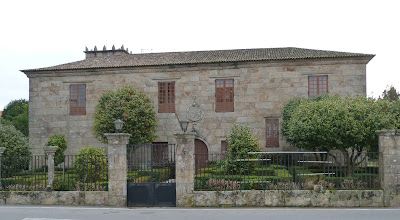 'O Pazo de Montesacro ' was built in the early  18th Century by the Marquis of Montesacro, former lords of Santo Tomé. It was built in Baroque style and has a large shield on the front with the emblems of Zarate families and Murga,  family from La Rioja who purchased the estate to its former owners. Adjacent to the Manor House is the Church of the Valvanera, Rioja Virgin brought by the lords of the Manor House and that was why his cult took root in the village. The church has an interesting baroque altarpiece. The last Marquis of Montesacro’s wife, who died childless, sold the property to an order of nuns. Today it is a house for old people. If the Church is not open, the nuns allow to enter  through the front door. 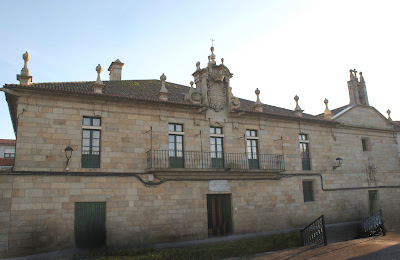 Next to the church of Santa Marina is the rectory (the former residence of the parish priest), which belonged to Fonseca family. It shows a shield in the front with the five stars of the family. Today it is a municipal property,  restored as  the Albariño wine  museum, which is only produced here and it is perhaps the best white wine in the world. 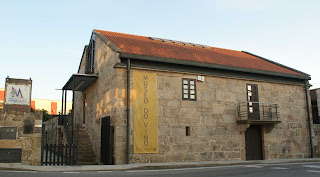 'O  Muiño da Seca' was built by the lords of Fefiñáns in the 17th century. It is a mill that uses the rise and fall of the tide to move the stones that grind the grain.  Apart from grinding the grains from the manor, farmers could also grind their own crops, after paying a proportional part to the miller. This was called  the 'Maquía'. It has been recently restored and now it is an interesting museum. 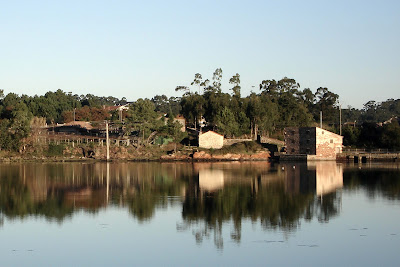 The liberal revolution began in France in 1789 and  spread to Europe . It caused major changes in Cambados. The different confiscation decrees of Liberal governments involved the expropriation of property of religious orders, as it was the case of the Franciscan Convent of Cambados. The former convent church became the parish church. One of its buildings became a school, others became a headquarters and part of their land was sold to rich families, such as  the Fraga family who erected a house in the garden of the convent. This property was purchased by the City and today it is the Municipal Library. 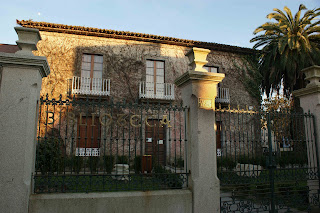 The creation of the councils and courts, institutions that were previously controlled by the feudal lords of Cambados, became dependent on the state.  They built the current building of the Town Hall for the courthouse and jail. 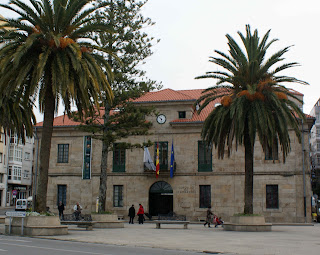 In the district of Fefiñáns are the birthplaces of  two major figures of literature and art in Galicia and Spain: Francisco Asorey and Ramón Cabanillas. The poet Ramón Cabanillas’ birthplace is now a museum about his life and work and it is a typical nineteenth-century sailor house. 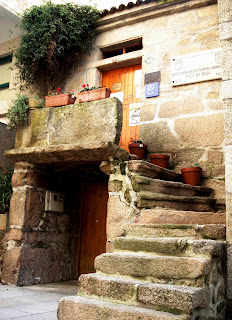 The sculptor Francisco Asorey’s birthplace is in the square with the same name. Now it is a private property and you can only see the façade of a modernist house in the late s. XIX. In front of it there is a monument erected in his honour with a copy in stone of his famous work 'Naiciña'. 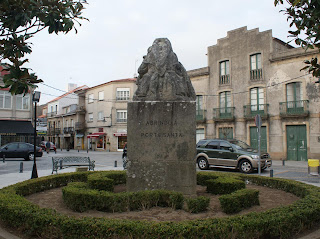 Posted by Maribel Iglesias Baldonedo at 17:42